I posted a little diatribe about relaxing and not getting too worried about the markets; that is still my focus.

2 – The US Federal Reserve, in an emergency measure, reduced US rates by a half a percentage point

4 – As well, China has introduced massive stimulus to keep their economy moving,  Europe is likely to add stimulus to their markets as well.

These items should not inspire panic in you personally, but as an investor, it highlights two things.

(a) Officials, both financial and medical, expect things to get worse and are trying to get out in front of ‘worsening’ conditions.  You should consider this for your investment portfolio too.

(b) Companies are not sustaining their valuations based on operating conditions, rather, governments are attempting to prop them up by throwing tax dollars at the problem.

The real concern here is that the COVID-19 virus is not a financial beast and throwing money at it is not likely to make it go away.   Yes, money will pay for resources like personnel, medical testing and more equipment, but the fundamental problem is one of human behaviour and very few will throw caution to the wind and head out to the mall, the movie theatre, or even schools if the virus begins to spread rapidly in their community.   The money being thrown at the markets now will almost certainly be wasted if the virus affects a large swath of North America.

Remember to ensure you have an ample reserve of cash in case markets freeze up, and consider that markets are within a hair’s breadth of their all time highs.   It has taken 12 years to recover from that last financial crisis, and there may be a time in the future when you can buy the same company for a lot less money.

Finally, also remember that it is difficult to predict markets and even harder to predict the path of a virus.   There is no ‘right’ answer but when I was a financial adviser, one of the key lessons I learned was that understanding how people would FEEL if their investments went down was just as important as the money.

Now, onto my market commentary because I got started.   I have urged you to rethink your portfolios as this virus thing may get much worse.   I spend my days and nights predicting markets, and I can tell you that I am not quite sure which way things are going to go.    But I also spend a lot of time analyzing economics, and I am pretty confident things are about to get a lot worse on that front.

The Coronovirus is still difficult to predict, but the economic effects are becoming clearer and clearer.   That economy that was ‘doing great’ is now starting to decelerate and it may do so rapidly if people stop moving around.   To quote Warren Buffet, “when the tide runs out, you find out who is swimming naked”.

I won’t produce a chart of all the debts circling the world, but suffice it to say, there is a lot of cash flow required to sustain the current economy, and if it dries up, then many companies will be hurt and possibly for a long time.  In China, the central government is taking over companies, supporting many others and we are seeing the same occurrences start in Europe as well (Flybe, an airline), and at current oil prices, you should expect oil companies, retailers and much more to simply give up on their businesses if this drags out over the next few weeks.

The world won’t end.   Things will likely get back on track, if not normal, within a few months (the Spanish Flu, 1918-1919 lasted about 24 months) , but between here and there the economic pain could be significant.

Please think long term and protect your portfolios as much as you would protect your family.   Chances are you have spent a LONG time saving and taking some money off the table now is not a bad idea.

By the way, if you pay any attention to investing, you will note that the bond market is reaching historic lows.  That happens when really, really rich people take their money out of stocks and put it into bonds, to protect against a perceived downward move in markets.   There is another concept in investing called ‘distribution’, in which the people who have made lots of money when things went up, sell to the dreamers during the first leg down.   They distribute their holdings to others.   I believe that is what is happening now, although we won’t know for many, many months.

I offer this well researched chart of investor emotions.   We are currently in the Anxiety phase.   You want to invest during the despondency or depression phase. 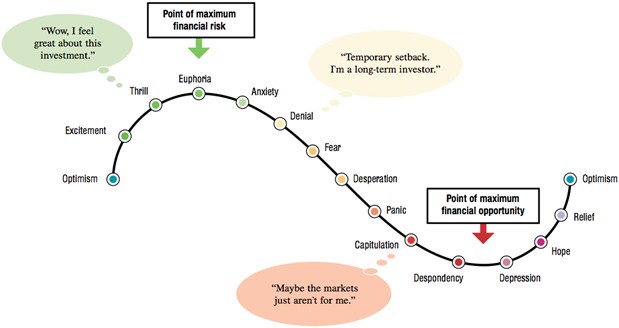