[The essence of this post was originally posted on my travel blog and has had resounding success (for me), so I am re-posting it here.]

A brief note about the unusual market conditions caused by the coronavirus and what you should consider as you evaluate your investment portfolio.

To begin, you should know a couple of things. I am not a biologist, I am a market skeptic and I have been wrong for a long time about the direction of the markets, indeed, the world.

With that said, I have studied and invested in markets, particularly equity markets, for over thirty years and have experienced ups and downs that have been a larger cause of my grey hair than I would like to admit. So this isn’t a passing comment . . . It’s insight based on experience and training.

First off, if you don’t want to read any further, here are the three things you should do now.

1. Make sure you have a stash of money to cover your cost of living for a comfortable period, say six months or a year, perhaps even two years if you have a lot of expenses that are hard to shed in a crisis. The closer you are to retirement, the more important this advice is!

2. Don’t make rash decisions about the financial markets, but don’t be cavalier either. If you have been over invested, believing things always go up, they don’t. If you have a long term plan, keep calm, and stop watching the financial news/media.

3. Think about your health. The real focus here is a health scare, and being healthy will serve you well if this virus makes inroads in North America.

So let’s begin with the virus COVID-19. Again, I’m not an epidemiologist, but it’s a real threat to the health of a very small percentage of the population. If it were to run rampant through society, the chances of you dying are very, very low. The chances of you knowing someone who dies is very, very high. Don’t confuse those two things. It is not at all a foregone conclusion that it will run rampant through society. The efforts to stop it are very notable so far. It is not clear yet whether they will work!

Despite what you might be hearing in the media, China is now (perhaps not at the outset) doing a fantastic job containing the virus. The characteristics for such an effective campaign are twofold. A resourceful government and a cooperative population. The rate of new infections in China has slowed dramatically in the last two weeks, and while they may not have it contained, they have at least slowed it.

It now appears that the virus will spread to Europe and the Middle East in force. This is bad news because the characteristics for an effective campaign are, again, resourceful governments and cooperative citizens. Italy and Turkey don’t strike me as meeting those criteria.

North America is still a wild card, with few cases and resourceful governments, it may be possible to stop the virus before it spreads widely.

Here’s the thing: stopping the movement of people is the key to stopping such an outbreak. Social distancing is also important, so if you’re told to stop moving about, do it.

What does all this have to do with markets? It’s simple. To stop the virus, people have to stop going to work, shopping, going to school, getting on airplanes, trains, subways. The economy must effectively halt in every area that has shown broad transmission of the virus. To be sure, when it’s 20 cases or 100 cases, you can localize this effort to individuals, but when it’s 3,000 (S. Korea) or 2,000 (Italy), you can’t use an individually tailored response (the required resources wouldn’t be available). You have to shut down systems en masse.

Our financial system runs on a knife’s edge. Heavy burdens of debt for individuals, corporations and governments require consistent cash flow to maintain liquidity. Without revenue, companies can’t pay employees, suppliers, debtors and, in normal circumstances, would go bankrupt. In times of trouble like this banks and suppliers try to be flexible (for a while). Employees have no recourse whatsoever, but hopefully companies can protect their interests for a few weeks or perhaps months.

Almost all financial collapses start with a debt problem. Publicly identifiable debt markets are at least twice the size of equity markets. When liquidity (trading, issuance) of debt dries up, economies shudder and sometimes crash.

The market collapse of 2008/2009 was the result of such an event, the collapse of mortgage securities. Greece, the country, essentially failed shortly thereafter (2010) too. Their spending was much higher than their taxes. They continue to feel the pain to this day.

The markets are falling, not because of the Coronavirus, but because economies are starting to freeze up. Italy has the highest debt to GDP in Europe (outside of Greece), and if they are not able to service that debt, then the EU could suffer significant financial fallout. This was being predicted throughout last year, the current crisis, simply makes it more critical.

Because China, and Korea are major suppliers to world wide manufacturing, supply chains are freezing up. They supply a lot of goods in high tech, manufacturing and other areas that will impact production, sales and therefore, cash flow.

Let me go back to the start; What does it all mean?

Markets have been pricing in perfection for a few years. The three key variables are:

– High profits (profits tend to decline over time without significant boosts to productivity or innovation), and

This has resulted in valuations of companies growing larger (higher prices) than has been experienced in the past. For an old guy like me who lives and breathes valuation, it’s crazy … and yet it has continued. Until now.

Now that this virus is freezing markets, any one of these variables (and possibly all three) could be taken away and markets are only beginning to price that in. That company sales might decline, that profits might stagnate, that costs might rise. The virus is the reason, but it’s not really about COVID-19. It’s about behaviour.

So what should you do? It’s really too early to tell that. The most important part of this story relates to human behaviour. How will people behave while they are afraid of contracting a potentially life threatening disease? How will they behave if it takes hold and spreads through another (or more than one) major economy? How will people recover, if it does truly become a pandemic?

These answers can take months to become clear. If you are risk averse, close to retirement, or worry about markets a lot, there is nothing wrong with selling a bit of your investments and waiting to see what happens. The markets are still very close to a 12 year high. If you’re young, this is likely to be another blip in a 30 or 40 year plan, don’t sweat it if you have another 25 years to save. 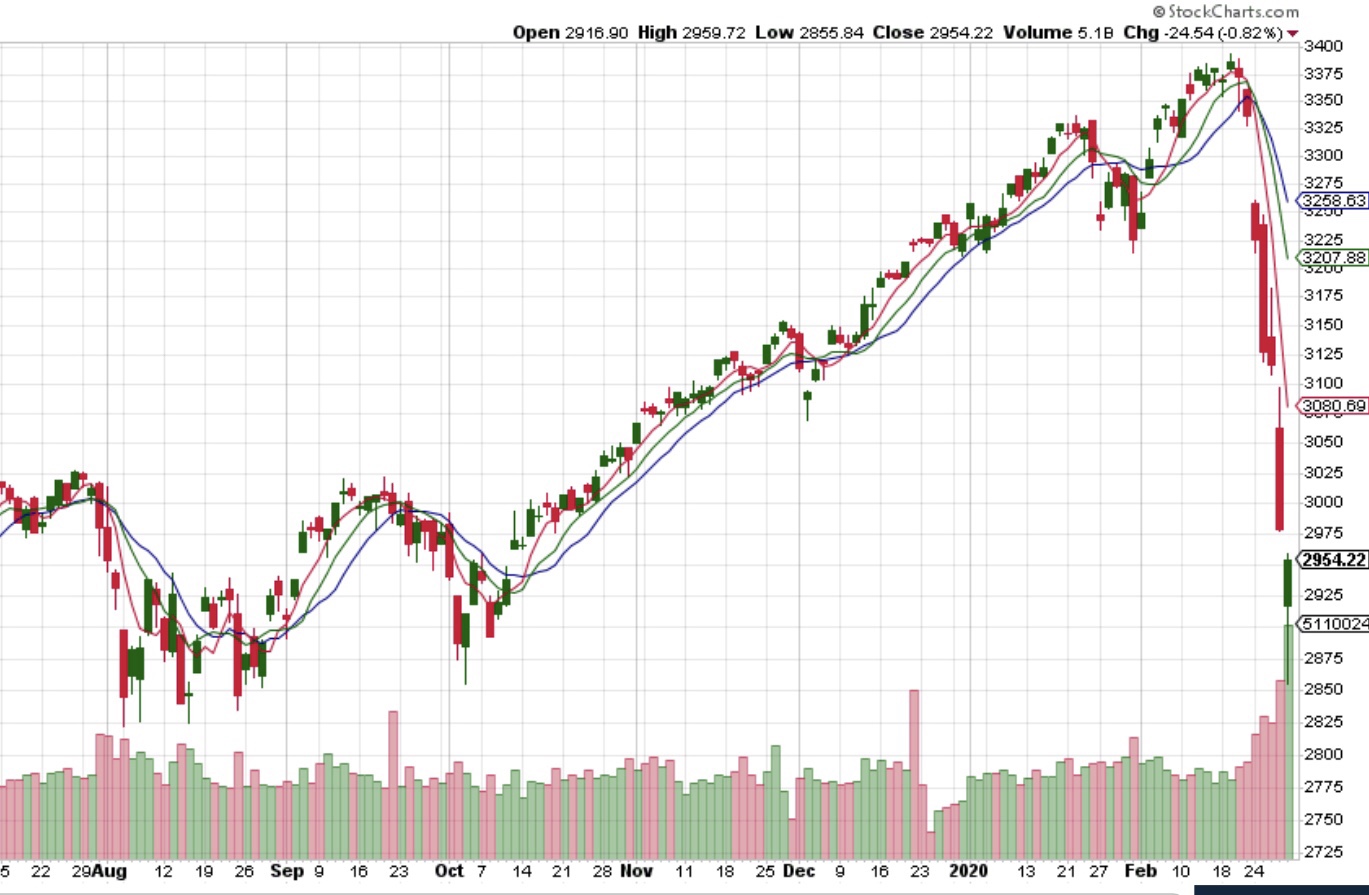 Finally, please recognize that the last 40 years have been remarkable, with markets rising and standards of living for almost everyone (even the poor and working poor) rising dramatically. It is not likely to continue (US politicians Bernie Sanders and Donald Trump are at opposite ends of the spectrum of possible outcomes). So expect this to be a bump in the road, but probably not the last one. Markets do go down, they go nowhere and they go up. We have experienced a lot of up with almost no down and things can revert to normal without any warning.